The bussboard was my answer to the ailing buss bar setup. I got tired of soldering/unsoldering the power cables for modules, and put in screw terminals on a circuit board that has nice, big power traces and lots of power-supply filter caps to keep the voltages stable. There is one bussboard under each module row, and a big molex connector to the power supply.

This is the good old 8782+8700 keyboard, but where are the telltale blue circuit boards? Well, they were getting kind of peaked (moisture corrision; the head unit was better-sealed (and all boards have long since been Krylon'ed to keep them in good shape) and I decided to replace them. To that end I replaced the power supply--the old one of which ran hot as it was--and designed my own.

This thing could effortlessly power 2 of these setups. 🙂 (Not to mention a space on the power supply board for another 7805).

The original keyboard encoder worked, but was in rather shabby condition after the copper got greened over the years. The wiring to the keyboard rank wasn't all that great either, so I replaced the whole thing with my clone of the 8782:

Notice the ribbon cables I used to connect to the keyboard--much less of a hassle to dress and fasten down than the huge rat's nest originally used. Also notice that I was lazy and used 1N4003s for the matrix diodes. Also notice that I still have the lurid red power cord--whereever did you get those cords? They're as much a trademark of the 70s-era Paia equipment as the logo is.

Luckily, you still had a few 8700 keypad boards left when I called for a replacement in 1987. I sealed this one (you can just see the sheen of the Krylon in this image). I also replaced the DB-25 and ribbon cable as well as the ribbon to the encoder (which is removed to make the pictures easier to take). 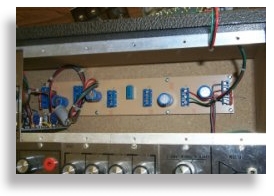 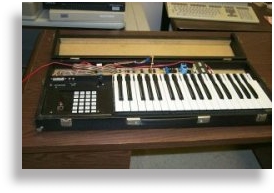 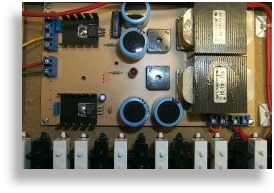 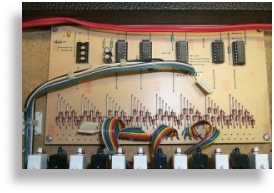 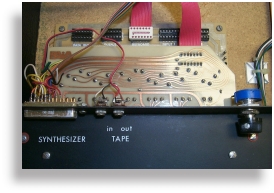 Items in Your Cart

Any cookies that may not be particularly necessary for the website to function and is used specifically to collect user personal data via analytics, ads, other embedded contents are termed as non-necessary cookies. It is mandatory to procure user consent prior to running these cookies on your website.